The Twenty-Sided Sorceress Book Five is out today!

“Life-changing moments are sneaky little bastards. Often we don’t
even know that nothing will be the same until long after, only in
hindsight can we look and say ‘There! That was it! That changed
everything.’
At least we could, if we’re alive to do it.”

Gamer and sorceress Jade Crow’s psychotic ex-boyfriend, Samir, shows up for an epic showdown, and nothing in Wylde will ever be the same.

Here’s how you get it:

My short story “Goodnight Stars” which appears in The End is NOW edited by John J Adams and Hugh Howey, was nominated for a Hugo.  The story will be in the nomination packet as well as online for free now, so that those who wish to read it may. I’m damn proud of this story (the entire set of stories I wrote for the Apocalypse Triptych actually, I think might be some of my best work ever).

I should be dancing about this. Inside, I am a bit. Because it’s a damn good story, maybe the best short story I’ve ever written (and I’ve written over 100 of those things in the last six years).  But this Hugo season is full of controversy, which I’m not going to really talk about, because I find it exhausting and I have better things to do. This will be my only statement about it, if I can help it.

To clarify some things that shouldn’t matter but apparently do:

I am a socialist, if I have to quantify my political leanings. I’d vote Elizabeth Warren into the presidency if she ran, though she’s still not liberal enough for me (but she’s smart enough, too smart to run probably, hah), if that gives an idea of what I mean here.

I am queer in that I am an out bisexual who has had more female partners than male. (I am married and monogamous with a man but still identify as bi because I don’t think who I ended up in love with should matter).

I have two X chromosomes and a vagina. Also boobs. And tattoos (90 hours and counting!).

My nominated story features a non-white female protagonist. Most of my stories do, actually. I think the world is a very interesting and diverse place, I grew up in a multi-ethnic and diverse family, and I don’t see our future becoming less diverse so I choose to write about a world that has as many different people in it as I can dream up.

Honestly, the thought that the above information would change whether or not my story gets read and considered, in either direction, makes me a little sick to my stomach.  I am not so naive, however, that I think we exist in a political and social vacuum. So I figure these things need to be said by me, so that at least the information is out there. People will still make whatever assumptions they want to, and will vote however they want to. That’s out of my control.

What is in my control is how hard I work at my job. I am a professional SF/F writer. I’ve attended more than 20 workshops over the last five years, always striving to deliver better and more awesome stories for my readers. I work my ass off on my craft and on the business side. I’ve sold over thirty short stories to magazines and anthologies. I’ve sold nearly a quarter million books as an indie author.

My job, as I see it, is to write the best damn books I can, books that readers will love and not be able to put down.

I feel that “Goodnight Stars” is one of my best accomplishments. My editors, many reviewers, and my readers have agreed with this.  I think I get as much fan mail about my stories in the Triptych as I do about my bestselling urban fantasy series. So I hope the story gets read and judged on its own merits. If it doesn’t… well… not much will change.

I’ll still be here, working to write better and better books. Because I have the best fans and readers a writer could ask for, supporters who allow me to go on being a full time author and to keep doing my job.

And that is an award nobody can take away from me. 🙂

I’ll be in Seattle this next weekend for Norwescon.  I’m on a few panels and will be doing bar-con a bit so hopefully I’ll see some peeps there! 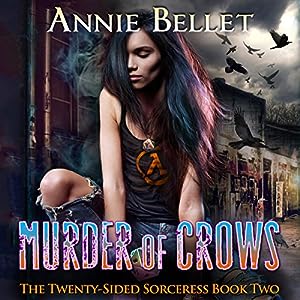 It’s here!  That’s right, Murder of Crows: The Twenty-Sided Sorceress Book Two is now an audiobook. The kick-ass Folly Blaine continues as narrator, bringing Jade and her world to life.

Sales. On The Twenty-Sided Sorceress. Cause readers are awesome and apparently you guys really like Jade. Yay.

So thank you, everyone. You all rock.

The first book in The Twenty-Sided Sorceress is now in audio, read by the very talented Folly Blaine. 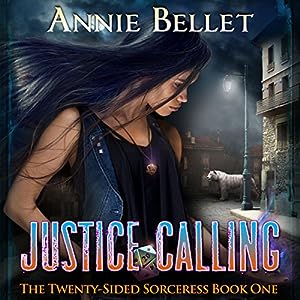 Get it on Audible here.

I’m doing a little experiment, with some help from a bookstore called Powell’s Books. They are the largest independent bookstore in the country and totally awesome.

So here is how it works. The Powell’s at Cedar Hills Crossing is carrying some of my books (after a very successful signing back in November) and I made a trip in to sign them.  So there are a very limited number of copies available, signed, right now. If this works and people want more signed books, Powell’s and I can coordinate more orders and I’ll make another trip to get stuff signed.

Below I’ve put book covers for the books that are available. Each cover links to the Powell’s website. Click the link of the book you want a signed copy of, and buy it! Powell’s ships pretty much everywhere, I think. Here is the slightly tricky part: you want to check the sale page and make sure the book is still listed as in stock at Beaverton, or your copy will be shipped from the warehouse and won’t be signed. So make sure it says in stock. Quantities are limited as this is an experiment.

Here are the books you can choose from:

Pre-order it on Amazon Here.

Book five in The Twenty-Sided Sorceress series will be titled Heartache and here’s the awesome cover from Ravven:

Book five will release sometime in Spring 2015.  I’ll have the exact date and a pre-order link sometime around the release of book four, which is December 9th (not so far away now).